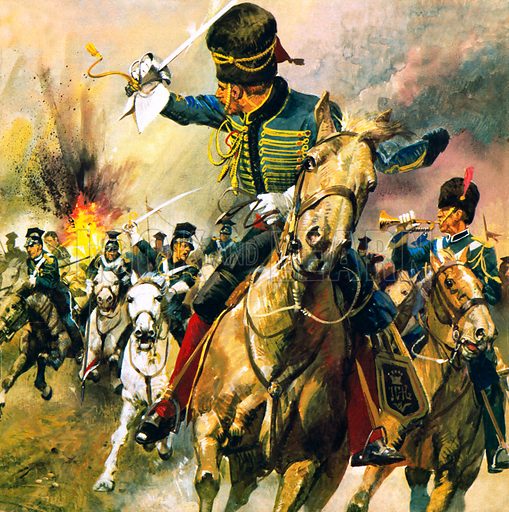 Authenticity begins at the point of accepting who we are as we are. I believe growing in self-awareness is scary at times because of the surprises that often accompany self-discovery. There’s no way around it, as leaders we will often be required to lead people into uncharted territory.

Leading into the fray as I call it requires courage, and courage requires honesty with ourselves and everyone around us. In times of difficulty, we’re either all in or not in at all. To lead effectively we cannot be dishonest or half-hearted. We must be fully present all the time. Sometimes leadership can resemble warfare, especially when leading into the fray.

“The Charge of the Light Brigade” by Tennyson was written about the 600 soldiers of the British Light Cavalry Brigade who rode into an artillery attack while being fired upon. The Brigade is known for their courage under fire against all the odds. There is a truth about leading into the fray we must all face, there’s nowhere to hide.

I think Tennyson’s poem makes for a good illustration of leaders who demonstrate courage when leading their teams or organizations forward during times of uncertainty. Most of us will never be tasked with life and death decisions but good leadership always requires courage and truthfulness.

Courageous leadership is always at a premium during difficult times. Leading through internal transitions, changes in cultural norms or economic downturns will test the nerve and skillset of any leader.

“Boldly They Rode and Well”

Leading into the fray introduces us to ourselves as nothing else will. The Commanders of the Brigade rode straight ahead courageously, with swords drawn, they were relentless until they broke through enemy lines.

“Circumstances do not make us or break us, they reveal us” – JSP

I believe leading into the fray requires some non-negotiable characteristics such as:

#1- Understanding the Realities of the Situation
It’s my opinion that Dr. Martin Luther King Jr is an excellent example of courageous leadership leading into the fray. King considered by many to be one of America’s most influential leaders.

Taking his stand for civil rights King had no illusions about what he was up against. In his famous “I have a dream” speech in Washington D.C. King said, “I just want to do God’s will. And He’s allowed me to go up to the mountain. And I’ve looked over. And I’ve seen the Promised Land. I may not get there with you.” King was a leader who put his life on the line for what he believed in, he understood the realities of the situation.

#2- Acquiring all the Facts You Can
Research is always important and asking lots of good questions is invaluable. Like the military, your intel must be accurate, comprehensive and to the point. Being a good listener helps to bring clarity to your thinking. Understand the communication styles of those on your team so you can hear differing points of view while reserving judgment till after you’ve made a decision.

#3- Grappling with Transparency
As uncomfortable as it may be, leaders must be willing to face their fears, and make difficult decisions while under fire. Insecurity is a dangerous thing when leading into the fray.

Effective leaders have a good degree of self-awareness and can manage their emotions while being honest about them in difficult situations. It always takes courage to practice truthfulness with your team. Honesty breeds loyalty and security among good team players.

#4 – Assembling a Team that can Hold Their Own
John C. Maxwell says, “Teamwork makes the dream work.” The Light Brigade fought valiantly to the man, each was able to hold their own in the heat of battle.

Warren Buffett one of the wealthiest people on the planet, is known for allowing his teams to accomplish their objectives with the expectation of exercising good decision making and demonstrating exceptional problem-solving skills on their own.

You can expect a good number of wins from your team when members can pull their own weight in difficult situations.

“Whether leading through good times or difficult times you will always be at your best when you’re being yourself.” – JSP


(1) The Charge of the Light Brigade Stanza III by Alfred Lord Tennyson.