2 Chronicles 20:12
“…For we have no power to face this vast army that is attacking us. We do not know what to do, but our eyes are on you.”

Here we read a portion of King Jehoshaphat’s prayer for help. The armies of the Moabites, Ammonites, and some troops from the Meunites, came up to fight against Jehoshaphat.  The king is told about this “vast army,” a coalition of kings.  Jehoshaphat proclaims a fast and calls the people of Judah together to seek the Lord.  From all the cities of Judah the people came together united in prayer.

Keep Your Eyes on Him

Jehoshaphat knew they were vastly outnumbered, and lacked the firepower to successfully defend Judah against such an attack.  His prayer is a classic example of reasoning with God from the Written Word, and taking a stand on His promises to His people. He concludes his cry for help with a statement of fact and a complete surrender to God for their survival.  “…For we have no power to face this vast army that is attacking us. We do not know what to do, but our eyes are on you.”  This is an incredible statement of faith.  Don’t ever be afraid to state your case as it is, telling God what you think and how you feel… just keep your eyes on Him!

Don’t Be Afraid God Will Fight For You

The Holy Spirit then comes to rest on a Levite named Jahaziel, who prophesies to the people;  “Listen, King Jehoshaphat and all who live in Judah and Jerusalem! This is what the LORD says to you: ‘Do not be afraid or discouraged because of this vast army. For the battle is not yours, but God’s” (2 Chronicles 20:15).  Outnumbered and no match for the coalition of Kings, their strategy was sending their singers out ahead of their army singing: “Give thanks to the LORD, for his love endures forever” (2 Chronicles 20:21).

Did this most unconventional plan work?  Of course it did! We read; “As they began to sing and praise, the LORD set ambushes against the men of Ammon and Moab and Mount Seir who were invading Judah, and they were defeated” (2 Chronicles 20:22). God hasn’t changed, the fight still belongs to the Lord, and there is still power in prayer and praise!

In Acts Chapter twelve we read that Peter was thrown into prison, and “the church was earnestly praying to God for him” (Acts 12:5).  They too, gathered together before God and continued in earnest prayer for Peter. Keep in mind they had no political influence that could be used to secure Peter’s release. They weren’t discouraged though the odds of a hopeful outcome were against them; so they simply prayed… Their eyes were on God!

Their prayers brought the angel to Peter’s rescue and facilitated his release (Acts 12:6-11). They took their stand together with their eyes on God. That battle was also the Lord’s. The Church and the Roman authorities both encountered the God who fights for His people! 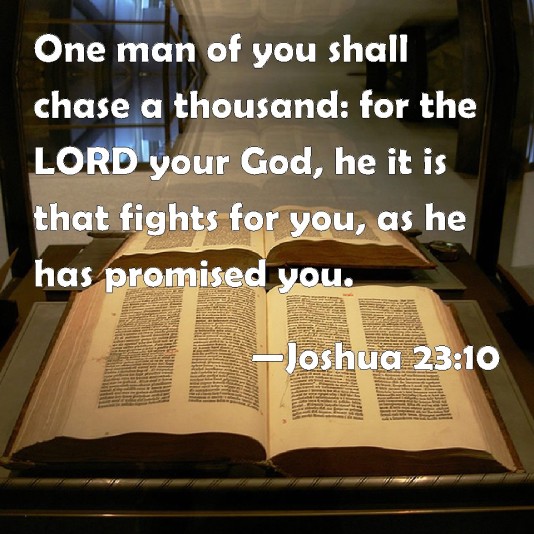 Trust The God Who Fights For You

Follow their example, and be committed to united prayer in your Church, take a stand against the armies of spiritual darkness. Keep your eyes on Christ, place your hope in the God who fights for you, and Be Encouraged! -JSP