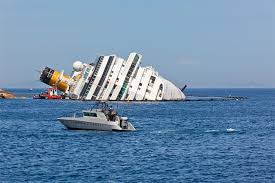 “The first responsibility of a leader is to define reality.” – Max De Pree

It was January 13th, 2012 when I first heard of the Italian cruise ship “Costa Concordia.” The news reported that it was near Isola del Giglio (a small island off the coast of Tuscany) where the Concordia going outside her originally charted course drifted too close to the island striking the rocks and eventually overturned.

Rescue workers spent most of the day getting passengers ashore; the disaster claimed 32 lives. During the investigation, it was discovered that the Captain had left the ship with hundreds of passengers still aboard. The disaster cost an estimated $2 billion, that’s three times the cost of the ship itself.

The Captain allowed the Concordia to get too close to the island (four miles closer than normal). Another issue is the accelerated speed (16 knots) for such a large vessel passing so close to the coastline.

Leading in a crisis

Anyone in leadership can tell you that a crisis can arise at any time. Whether you’re leading a business, a sports team, piloting an airliner or in command of a vessel as the Concordia, understanding what to do in a crisis is a matter of preparedness.

Every crisis will challenge leaders placing demands on who they are and what they know. Some situations come suddenly catching leaders by surprise forcing them to make difficult decisions in a moment; at other times it could be the leader’s decision that brings on the crisis, which is the case with the Concordia.

Very few of us will ever face the responsibilities that come with a crisis on the scale of a cruise ship yet, as a leader, you must be prepared to respond to a crisis that may adversely impact your organization.

5 Principles for leading through a crisis

“Courage is resistance to fear, mastery of fear – not absence of fear”- Mark Twain

1) A rapid response is crucial

Discover define and address the problem as soon as possible. As a leader, you must be the first to roll up your sleeves and get involved in identifying what is happening to understand your current situation and how to communicate it to your key people.

If you as a leader are unable to manage your emotions, there’s little chance of you reassuring your staff in a time of crisis. It’s the visible stability of a leader in times of crisis that communicates confidence and strength to the people.

People need to know what’s going on, is there a plan, and what should they be doing? People are reassured while being informed by those in charge.

I can’t imagine what it did to the officers, employees, and passengers on the Concordia to discover that the Captain disembarked while they were all still aboard.

Writing down the main concerns so you can better grasp the seriousness of the crisis and communicating what needs to be known and with whom goes a long way in averting panic.

In a crisis conditions can sometimes change rapidly, setting your best plan in motion step by step gives you some breathing room to address changing conditions.

Once the crisis is over, plan a meeting with your team to critique how the crisis was handled. Note what worked and what didn’t, and what you will do differently in the future.

“When you face a crisis, you know who your true friends are” – Magic Johnson