“I charge you in the presence of God and of Christ Jesus, who is to judge the living and the dead, and by his appearing and his kingdom:  preach the word; be ready in season and out of season; reprove, rebuke, and exhort, with complete patience and teaching.

For the time is coming when people will not endure sound teaching, but having itching ears they will accumulate for themselves teachers to suit their own passions, and will turn away from listening to the truth and wander off into myths.”

We Need to Listen to Paul’s Instructions

To Preach the Word the speaker needs to understand what the biblical writers were actually saying to the Church. The bible must be correctly interpreted before it can be accurately communicated. The first rule of basic bible interpretation is “the context rules.” The question is what context?

With so many ministers and scholars emphasizing a myopic interpretation of the Scriptures, things can get off center in a hurry. For decades the Church has been told that God wrote us a love letter, or the bible was written to us. Is it any wonder that we have so many differing interpretations to a single text?

Unless we’re at least 2000 years old, the bible was not written to us. This is the result of a  popular surface self-help preaching and teaching. The fact is the Scriptures were written to people who lived thousands of years ago and not to us. Since it is the Holy Spirit who guided the biblical writers, every word written is certainly written for us (see 1 Corinthians 10:11, Romans 15:4).

Far too many Churches are teaching traditional American cultural values as doctrine, and unwittingly training a generation of believers to live in contradiction to the clear meaning and teaching of the Scriptures. This more than anything has contributed to the fragmentation of the American Church.

This is the result of unskilled untrained leaders handling the Word of Truth. The lack of diligent expository study have the biblical authors saying things in modern day sermons that they never said in their Spirit inspired writing!

The Believing individualist verses The Communion of the Saints

Much of today’s preaching in America fosters a myopic view of salvation, and God’s Kingdom purpose and vision for the cosmos. Both the Old and New Testaments always emphasized community; the nation of Israel in the Old Testament and the Church in the New Testament. In fact, Stephen referred to the children of Israel as “the Church (ekklēsia) in the wilderness” (see Acts 7:38). 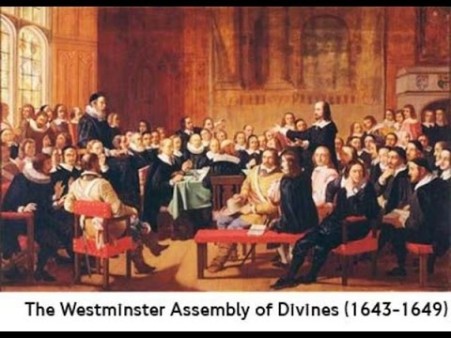 The Westminster Confession on the “Communion of the Saints” states:

“All saints, that are united to Jesus Christ their Head, by His Spirit, and by faith, have fellowship with Him in His grace, sufferings, death, resurrection, and glory: and, being united to one another in love, they have communion in each other’s gifts and graces, and are obliged to the performance of such duties, public and private…”

This certainly resembles Acts 2:42 “And they devoted themselves to the apostles’ teaching and the fellowship, to the breaking of bread and the prayers.” The early Church was committed to Christ and to one another. Too many today are committed to their favorite personality… the church at Corinth made the same mistake (1 Corinthians 3:1-11).

God’s promises are given within the context of the believing community. In both Old and New testaments individuals did not own their own personal copies of the scrolls (Scripture). This meant that they heard the commands and the promises of God when they were assembled together. God’s people were originally practicing the commands of Scriptures and standing on the promises together in community.

A Much Needed Restoration of Expository Preaching and Teaching

Expository preaching and teaching unfolds the meaning of a particular text or passage of Scripture. It gets at the biblical writer’s intent and explains both the context and purpose for that particular passage.

Proper exegesis (critical explanation or interpretation of a text) is imperative for articulating the actual meaning of a passage in its original context.

We read in Nehemiah 8:2-3 “So Ezra the priest brought the Law before the assembly, both men and women and all who could understand what they heard, on the first day of the seventh month. 3  And he read from it facing the square before the Water Gate from early morning until midday, in the presence of the men and the women and those who could understand. And the ears of all the people were attentive to the Book of the Law.”

Ezra had six men standing on his right and seven men standing on his left. When he opened the book of the law the people bowed with their faces to the ground and worshiped God together. Ezra also had thirteen Levites who “… helped the people to understand the Law, while the people remained in their places. They read from the book, from the Law of God, clearly, and they gave the sense, so that the people understood the reading” (Nehemiah 8:7-8).

How the Church in America today needs Leaders who like Ezra, and Timothy will be diligent to present themselves to God as those approved, workers who have no need to be ashamed, rightly handling the word of truth (see 2 Timothy 2:15).