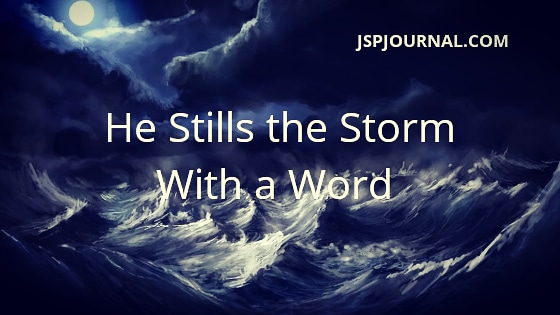 “The storms of life come to all of us at one time or another, I’m grateful to be in the hands of the One who stills them with a word.” -JSP

Mark 4:35-38
“That day when evening came, he said to his disciples, “Let us go over to the other side.”
Leaving the crowd behind, they took him along, just as he was, in the boat. There were also other boats with him. A furious squall came up, and the waves broke over the boat, so that it was nearly swamped. Jesus was in the stern, sleeping on a cushion. The disciples woke him and said to him, “Teacher, don’t you care if we drown?”

Here Mark records that in the storm Jesus was fast “asleep on a cushion” which most boats were equipped with. The pillow is a coarse leather material cushion usually found at the stern. In the storm, the frightened disciples woke Jesus saying, “Teacher, don’t you care if we drown?”

In verse thirty-nine, Jesus gets up, rebukes the wind and says to the waves, “Quiet! Be still!” The storm complies and it’s completely calm.  Jesus then says to his disciples, “Why are you so afraid? Do you still have no faith?”

Both questions asked by Jesus have to do with who the disciples know him to be and remember what he said to them before leaving the shore. The disciples didn’t grasp the truth that their long-awaited Messiah is the one who’s sleeping in their ship, and he states at the outset in verse thirty-five “Let us go over to the other side.”

The fact that Jesus is asleep in the midst of the storm has no bearing on the outcome of his words. When Jesus says let’s go to the other side he intends to arrive with ship and crew intact.  In Luke 1:37 the angel Gabriel in response to Mary’s question says, “no word from God is void of power,” God tells Jeremiah “I’m watching to see that my word is fulfilled (Jer. 1:12).”

Jesus doesn’t correct his disciples for waking him from sleep, but for being so fear-filled they questioned his concern for their welfare, not realizing their actions demonstrate they didn’t believe they were going to make it to the other side, where Jesus said they were going.

We shouldn’t be too quick to think less of the disciples who are no different from you or me. Haven’t we all experienced a direct promise or clear direction from God and we soon doubted because life throws us a curve before we see the fruition of what was told to us?

Abraham waited 75 years before receiving what God promised him, he never doubted or weakened in his faith that God would do exactly what He said He would.

In Romans 4:18-21 Paul writes, “Against all hope, Abraham in hope believed and so became the father of many nations, just as it had been said to him, “So shall your offspring be.” 19  Without weakening in his faith, he faced the fact that his body was as good as dead—since he was about a hundred years old—and that Sarah’s womb was also dead. 20  Yet he did not waver through unbelief regarding the promise of God, but was strengthened in his faith and gave glory to God, 21  being fully persuaded that God had power to do what he had promised.”

If you’re waiting on God for the fulfillment of a promise, I encourage you to revisit that promise to see if there are any conditions attached to it that you have not complied with, once that is settled you are free to remind God of His promise to you.

Keep reminding yourself that God never lies and He’s never mistaken, He still watches to see that His words are fulfilled.  Read Acts 27:22-26 and in the midst of your storm be as confident in what was told you like Paul the apostle who said,  “So keep up your courage, men, for I have faith in God that it will happen just as he told me.” – And Be Encouraged!